The new relationship between Man and machines in Industry 4.0

Are you ready for Industry 4.0?

Technology is always changing and there are trends which you need to know to shape and transform your business to evolve with the change.

We are currently in the midst of Industry 4.0, where manufacturing has become “smart” through the development of AI, the Cloud, the Internet of Things, and other such systems. The basic principle behind the fourth industrial revolution was that through linking machines and other intelligent devices, manufacturers could create smart networks throughout the value chain (from materials to production) that could control each other.

If there was any doubt that the pace of technology change keeps increasing, the recent pandemic that swept across the globe should put the topic to rest. A study by Mckinsey found that companies that have already scaled Industry 4.0 found themselves better positioned to face the crisis, while those who have not started on their Industry 4.0 Journey found themselves facing a rude wake-up call.

We’re living in an era of Moore’s Law—the Intel co-founder’s dictum that processing power would double every 18 months. However, it’s not the evolution in microchip technology that’s causing such rapid acceleration in industry, it’s the nature of the software. The emerging combination of big data and intelligent algorithms, often called machine learning and AI, connected by an increasingly ubiquitous mobile internet is on the cusp of changing everything.

It’s amazing how COVID-19 has accelerated technological advancements enabling them to grow at such a rapid speed—so much so that there has been an increase in the collaboration between humans and smart systems. A study by Mckinsey has found that the pandemic has sped up the adoption of technology globally by about 3 years with more and more companies implementing Industry 4.0 for their businesses.

The marriage between man and machine will help merge the high-speed accuracy of industrial automation with the cognitive, critical thinking skills of humans. Industry 4.0 is generally viewed as a new era of personalization driven by humans and machines working cooperatively together to solve problems.

So, in Industry 4.0, what will be the new relationship between humans and machines?

While the World Economic Forum predicts that by 2022, Artificial Intelligence will have eliminated 75 million jobs due to automation, they also predict that there will be 133 million more jobs created in their place due to the use of this technology. As you go deeper into Industry 4.0, you can create even higher-value jobs than you did before because you’re giving the freedom of design responsibility back to the human. Industry 4.0 is not about replacing humans in the workplace but about getting rid of outdated and “dead-weight” processes and using humans in much more valuable positions.

Another recent study from Meggitt shows that the workspace doesn’t become smaller in terms of a manufacturing cell around the human being; it becomes bigger. The human being is given more responsibility and you end up with a bigger, lighter environment that’s safer than the previous one. The manufacturing operative within the manufacturing cell starts to become more involved in the design process rather than the manufacturing process, which is automated. It allows freedom of design to work with you and enables products that are more bespoke and personal – something that customers are beginning to demand even today.

Increasingly more manufacturers are increasing the human component not only for the customization, but also for increased efficiency on the production line. One example is Toronto’s Paradigm Electronics, which manufactures high-end loudspeakers. The company uses Universal Robots’ UR10 robotic arm to polish the speaker cabs to a high-luster sheen, but it takes considerable time to do so. By adding a human counterpart, however, it increased its production efficiency by 50%.

The idea of collaboration between humans and robots on the assembly line is not a vision of the distant future. In a recent survey by Deloitte, of more than 11,000 business leaders, 61 percent of respondents said they were actively redesigning jobs around artificial intelligence (AI), robotics, and new business models. 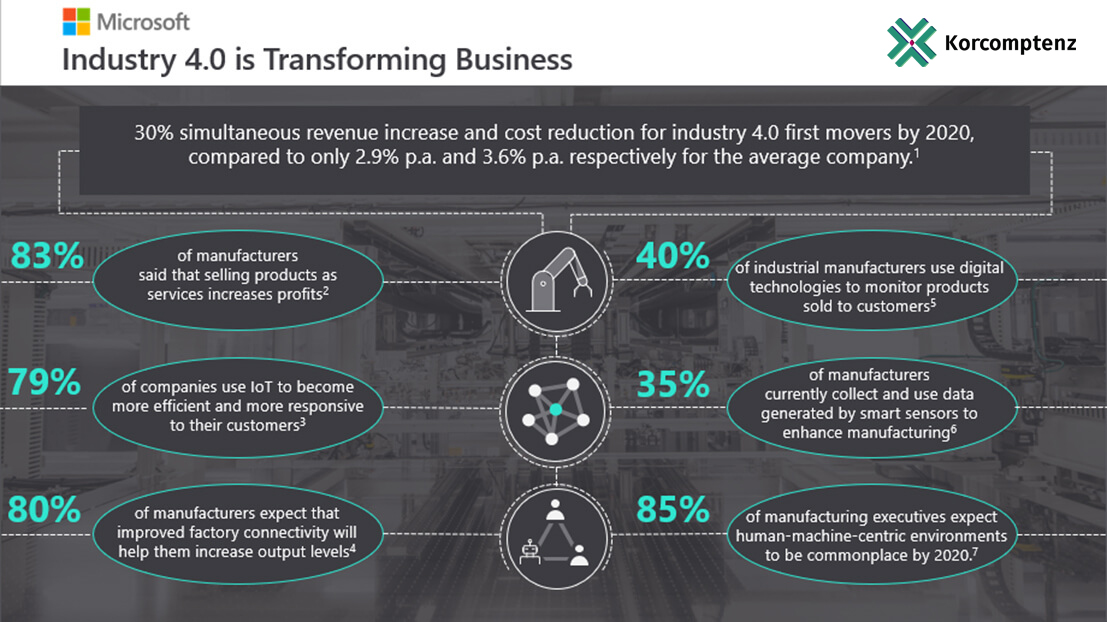 It’s not difficult to imagine a few other simple scenarios that are likely to become commonplace under Industry 4.0:

Requesting a consultation with a proven provider is the first step in getting your organization ready for Industry 4.0. The market is complicated and so is your business. You need an expert to help understand your needs and provide a plan for the future. KORCOMPTENZ can help. Schedule your complimentary consultation today.

Ad-Tech Investments To Make In Your Advertising Agency

Tell Us How We Can Help

We use cookies on our website to give you the most relevant experience by remembering your preferences and repeat visits. By clicking “Accept”, you consent to the use of ALL the cookies.
Cookie settingsACCEPTREJECT
Manage consent

This website uses cookies to improve your experience while you navigate through the website. Out of these, the cookies that are categorized as necessary are stored on your browser as they are essential for the working of basic functionalities of the website. We also use third-party cookies that help us analyze and understand how you use this website. These cookies will be stored in your browser only with your consent. You also have the option to opt-out of these cookies. But opting out of some of these cookies may affect your browsing experience.
Necessary Always Enabled
Necessary cookies are absolutely essential for the website to function properly. This category only includes cookies that ensures basic functionalities and security features of the website. These cookies do not store any personal information.
Non-necessary
Any cookies that may not be particularly necessary for the website to function and is used specifically to collect user personal data via analytics, ads, other embedded contents are termed as non-necessary cookies. It is mandatory to procure user consent prior to running these cookies on your website.
SAVE & ACCEPT
Go to Top